There’s Only One Way to Slice

For some, the tough meat solution is as simple as learning how to slice it both before and after it’s cooked. For those folks who insist on cooking their game meats until they are grey, tough and chewy…well, keep the Crock Pot on the counter and use it often.

How you slice any hunk of meat can make a big difference at the dinner table. You’ve heard about slicing meat “across the grain.” If you haven’t heard, then you’re probably just not paying attention. Take a close look at a piece of meat, the bigger the better. Notice that the muscle fibers run parallel to each other in long bundles or strands.

Much like a board, there’s a definite direction that those muscle fibers run. Depending on the cut of meat, the fibers may be more or less defined. The more tender cuts like tenderloins and backstraps have muscle fibers that are finer. The tougher cuts, the ones that do more work (or at least they did while the animal was still avoiding people like yourself), are more obvious. It is important that you understand that slicing a hunk of meat out of a venison hindquarter across the grain will make for a much more tender piece of meat. Slice it with grain and the same piece of meat will be much more chewy. I know. It’s crazy. 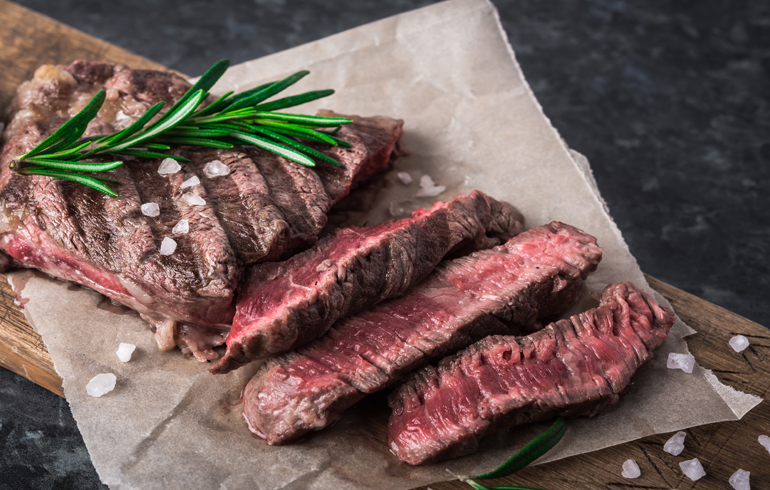 Before you start hacking away at a grilled venison loin, duck breast or even a wild turkey breast, take a couple of seconds to determine which way the grain runs. Note that on some meats, like tri-tip sirloins, that the direction of the grain changes from the short, stubby end to the longer end. Cutting across the grain means that you cut through the muscle fibers, creating a much more tender slice of meat in your mouth. Try this. Take any meat, preferably cooked to about 130 degrees for medium-rare, and take a couple of slices both with and across the grain of the meat. Try pulling the meat apart with your fingers. You can’t help but notice that the slices cut across the grain pull apart much easier than the ones cut with the grain.

The next time you have the good luck to have a whole venison loin (backstrap) on your cutting board, notice how the grain of the muscle actually runs at an angle that is neither parallel nor perpendicular to the length of the loin. If you or your processor has already chopped your loin into small butterflied portions, you should seriously consider not doing that anymore. More on that at a later date. Before I serve a cooked loin, I will slice it into 3 or 4-inch wide chunks along the grain and then slice it thinly across the grain and arrange the slices on plates or a platter.

Once sliced properly, you should see the grain of the sliced meat running from top to bottom rather than from end to end lengthwise. It may turn out that some of the meat you thought was tough was much more tender once you sliced it thinly across the grain. Keep that in mind when preparing meat for stir-frys as well. The meat only quick-cooks for a minute or two. It’s much more tender to the bite if it’s first sliced thinly across the grain. Same goes with jerky. Across the grain – tender. With the grain – you’re jerky will last longer.

Scott Leysath
Quite possibly the best chef you’ve never heard of…that’s Scott Leysath. Known for many things as well as being an executive chef, he’s also known as host of the Sporting Chef on television as well. He’s an avid hunter/angler who has developed a cult-like following over three decades of recipes, public appearances, cooking columns, cookbooks and TV shows.